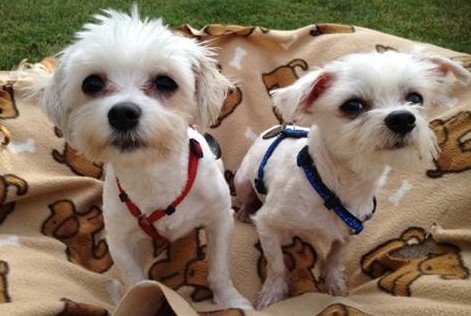 Posted at 17:45h in Blog, Success Stories by GregD 0 Comments 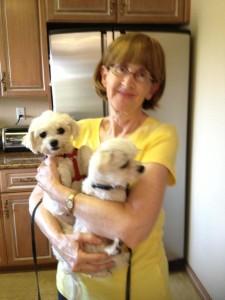 Look who has a new mama.. Dolce and Gabbana!! These two cuties were used as breeders at a pet store in LA were rescued by a SPOT volunteer last month. They were just two of the “excess inventory” that the owner wanted to dump. But look at them now! They found out what it is like to be loved.. something they never had experienced before. The best thing is they will be spending it together! It is happy beginnings for these two angels and we couldn’t be more happier for them. Way to go Dolce and Gabbana.. You made it!! 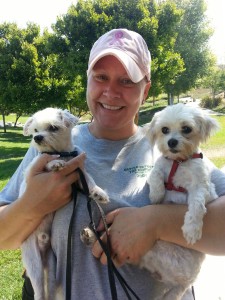 Check out SPOT volunteer Shelby, who adopted Miles, spending a beautiful day with Dolce and Gabbana at the lake. These two cuties are getting more comfortable everyday with the human touch and would love to meet their forever family! Maybe you? 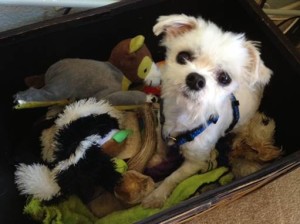 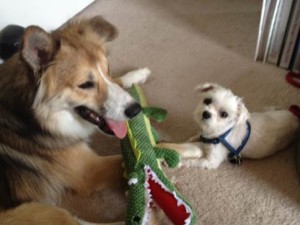 While we are waiting for our new home, Gabbana is discovering toys. He loves to jump into the toy box and roll around in the toys. CJ (our beloved Beau), wanting to be big brotherly, shows Gabbana how to actually play with a toy! Gabbana is really starting to get more comfortable with his surroundings and learning to trust. 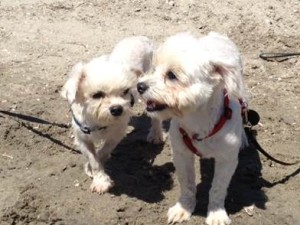 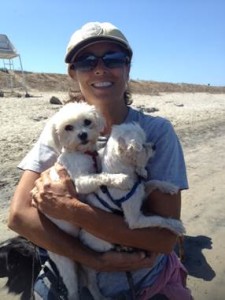 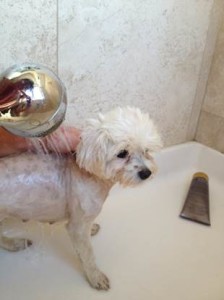 Check them out on the TV news this morning on KUSI channel 9 San Diego at 9:45am!

Yesterday, Dolce & Gabbana went to fiesta island for their first time today and did absolutely great. They hiked the island with a pack of 12 dogs. They have become so strong and so confident. Look at Dolce hugging Gabbana! The downside of the beach..bath time afterwards!! But now they will look pretty for their TV debut this morning! We hope you tune in!! 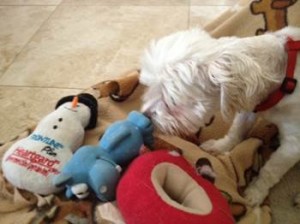 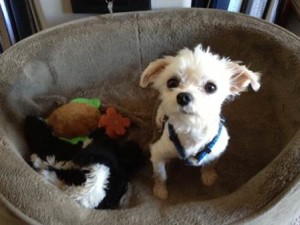 Dolce and Gabbana Day 9 after rescue!

We are starting to become brave and interested in things (especially the kitchen at feeding time. When it comes to playing, Dolce learning about squeaky toys- where only a few days ago he was scared of them.. where as Gabbana likes to lay in bed with his toys and roll all over them! They are housetrained, love to go on walks, even hiking, love car rides, and are great with everyone they meet (dogs, cats all people and of course love to snuggle! These two are getting comfortable every day! 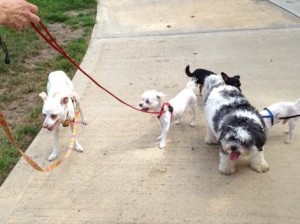 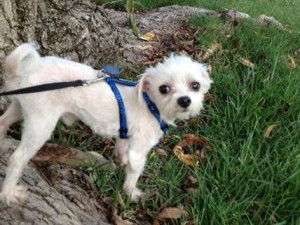 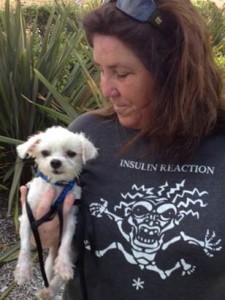 One week after rescue.. Dolce & Gabbana on their first leashed pack walk!

It took a bit of coaxing from Aunties Alisa & Dianne but Dolce got the hang of it. She now walks so proudly on her leash. Gabbana was a bit more frightened to walk, he preferred to be carried by Auntie Alisa..But after a consult with Dolce, he decided the lake and walk were actually pretty nice! 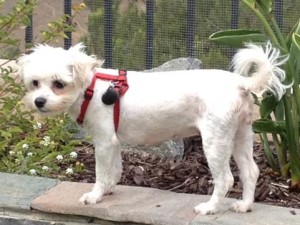 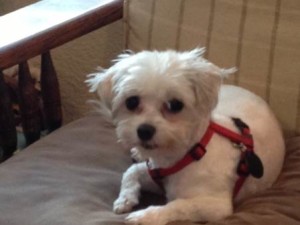 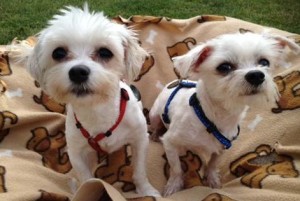 These two are getting more comfortable everyday! Dolce is the more adventuresome of the two and she has found her “own” special chair. She likes to be up high, she lays on the TOP of her kennel at times and loves exploring the backyard via the planter beds. Gabbana enjoys being outside as long as Dolce is with him. 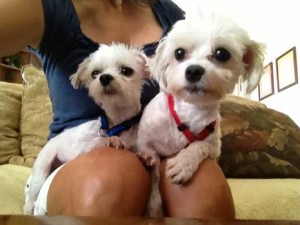 After days of decompressing from their horrific conditions, Dolce & Gabbana are starting to like the feel of a human lap. This pair of Maltese dogs, used as breeders at a pet store in LA were rescued by a SPOT volunteer last week. They were just two of the “excess inventory” that the owner wanted to dump. Because they were caged and never let into a home environment, they are super shy and frightened. They are slowly coming into their own but will still take some time for them to trust their humans.. 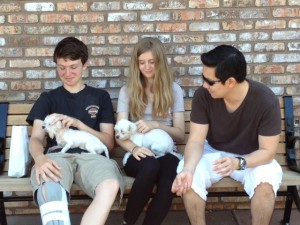 Dolce & Gabbana were healthy enough to attend SPOT’s adoption event this past weekend. These two are a product of puppy mill breeding. They were very scared and were comforted by SPOT volunteers and kind people that they met. A whole new world is opening up to them. Before all they had known was the inside of a kennel stacked between two other kennels, no fresh air, daylight, grass beneath their feet or the nice touch of a human companion. Here they are with our Jr Volunteers Kyle & Adrienne. They are both ready for a new family. 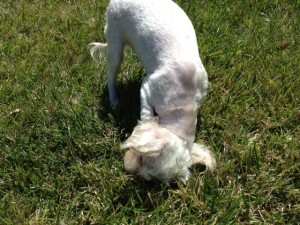 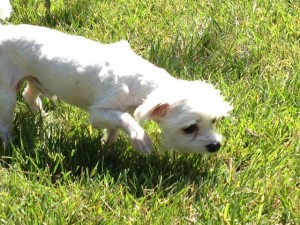 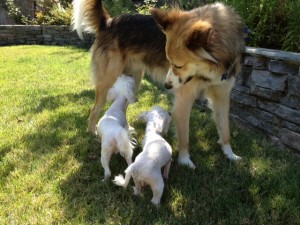 Imagine seeing the world for the first time but at four years of age.

Dolce and Gabbana, previously breeding dogs for an LA pet store, are exploring and learning about the world around them.

Here are their first steps on grass. They had no idea what to make of it and took each step with caution and care. Dolce decided she should rub her face in it (maybe to get the full smell and feel of it)- mmm this is cool stuff!

And here they are meeting their first big dog. They are sizing up their foster brother CJ- they have never met a dog so big, only ones that looked exactly like themselves. Truly, they were not sure what he is….. 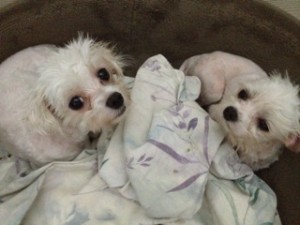 This pair of Maltese dogs, used as breeders at a pet store in LA were rescued by a SPOT volunteer on Friday. They were just two of the “excess inventory” that the owner wanted to dump.

Because they were caged and never let into a home environment, they are super shy and frightened. They freeze up as a coping mechanism for their fear—like deer in the headlights. They have never touched grass and don’t understand “walks”. Over the last few days they have been learning that people can be nice, that touching and petting can be enjoyable—and that life can be good!

According to our vet, their teeth resembled those of a geriatric dog—but they are young! (Dolce is 3 years old and 7 pounds; Gabbana is 5 years old and 5 pounds.)

Dolce needed 4 teeth pulled and Gabbana had 13 removed. They both had earmites, both are underweight.

SPOT had them vaccinated, wormed, tested for all parasites and heartworms, shaved and groomed—and then spayed and neutered. During Dolce’s spay surgery the vet found swelling and discharge—possibly she had miscarried and her body began to reabsorb the fetus. Fortunately, the surgery and antibiotics will resolve any potential for septic development.

We are happy to say that Dolce and Gabbana are ready for adoption – we are seeking two excellent homes where these lovely dogs can recover from their surgeries, slowly be introduced to the outdoors, and receive the loving attention the deserve for the rest of their lives.