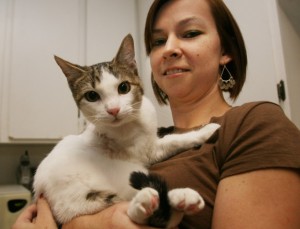 Nearly two years ago, a handful of North County residents who thought too  many stray dogs were being euthanized formed a rescue group to save canines that  were about to be put to death.

Since then, SPOT (Saving  Pets One at a Time) has expanded to rescue cats and kittens, has recruited  38 active foster families that care for the animals until they’re adopted, and  is helping to organize a countywide drive in February to spay or neuter 2,012 dogs and cats in one month.

So far, SPOT has saved 280 dogs and 217 cats that were scheduled to be  euthanized, said Kris Nelson, a founder of the rescue group.

“It’s been a crazy two years and we’re getting even stronger and better  known,” Nelson said. “It’s been a very good thing to see the good people can do.  Animals bring people together.”