Posted at 03:23h in Success Stories, Uncategorized by GregD 0 Comments 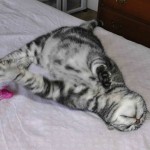 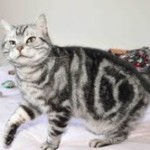 I pulled two teenage kittens from the Palomar Shelter last Thursday afternoon and right before I left to go get them there was an e-mail from Cathy at the Palomar shelter saying an owner had just turned in his 7 year old purebred American Shorthair Classic Silver tabby boy kitty named Sammie. I talked to Lori, she gave me the go ahead,  and he didn’t even have to spend one night there.  It wasn’t until we got him out of the cage at his new foster home that I noticed something wrong with his right eye. Nothing was mentioned about it in his kennel card. Jamie came and took pictures and it really showed up in them. Concerned,  we made an appointment for him to see Dr. Haver.

We took him to Surfside Monday evening to see about his eye. Dr. Haver said it could be one of 6 different things, including an infection, a bad tooth, or maybe even cancer. He really doesn’t think it’s cancer so prescribed an antibiotic plus eye drops everyday for 10 days. He said if there is no improvement in a week to bring him back in and they would sedate him and take an x-ray of a tooth in the back that has a lot of tarter.
So today Lori gets a call right as she’s going into a school classroom to talk to the kids about the importance of spaying and neutering. so she gives the man my number to call and he did immediately. He was very interested in Sammie. He and his wife lost there 15 year old American Shorthair boy named Sterling 6 weeks ago and when they saw Sammie’s picture on Craig’s List the wife told her husband to please get that cat for us. Long story shot, this wonderful retired couple adopted Sammie today. I fully disclosed everything going on with his health including the fact that there was a small chance this could be cancer. They came all the way from El Cajon at 4:30 in the afternoon. They had been hoping to adopt a two or three year old cat but I truly think it was love at first sight and I gave them a big group hug when they said they wanted him. I could tell they already loved him. They were such a nice couple and Sammie (new name to be Finnegan) which is one of my favorite Ire names, went home with them. They spent well over 1000.00 taking care of Sterling with sub Q fluids, etc. but they were willing to take the risk and adopt Sammie.

I knew you would want to know about the happy ending for this fellow. He will never be turned into a shelter again.